By Linda Cicoira — Voters on the Eastern Shore will choose between incumbents and their opponents at the polls Nov. 5 in races for state senate and delegate. There will also be seven other contested races for local offices in the two counties.

Sen. Lynwood Lewis, a Democrat, who practices law in Accomac, is being challenged by Elizabeth Lankford, a Republican, who owns a Melfa business. 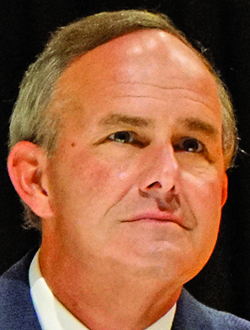 Del. Robert S. Bloxom Jr., a Republican, who owns several Shore businesses, is being opposed by Phil Hernandez, a Democrat, from Norfolk, who has worked as a civil rights attorney. In Accomack County, two are vying for the job of retiring Treasurer Dana Bundick. Her longtime clerk, James A. Lilliston Sr., of Melfa, wants the post as does Brandy Custis Childress, of Accomac, who manages the PNC bank in Chincoteague. In Northampton County, Sheriff David Doughty, of the Cape Charles area, is seeking another four-year term. Raymond Lee Gunter III, of Belle Haven, a former Northampton deputy, is running a write-in campaign for the post. There are two contested races for school board in Accomack. It will be the first time voters will get to choose those leaders as they were previously picked by the school board selection commission, a panel appointed by the circuit court judge.

Appointed member Gary S. Reese, of Parksley, a former coach and physical education teacher, and Connie C. Burford, a school activist, from Bloxom, who worked to get the board elected through a referendum, are vying for the District 4 post. Janet Martin-Turner, a former school board member, who was not reappointed to the board by the selection commission after she clashed with other school board members who didn’t want her to speak publicly about issues, is seeking the District 7 seat held by George Waldenmaier, who was her predecessor and is not seeking election. Martin-Turner also worked to get a referendum for an elected school board. Also seeking the District 7 seat, Thomas E. “T.J.” Johnson III, a former school administrator, who was one of a dozen people laid off from the Eastern Shore Community College, works at a Maryland school division. Both Martin-Turner and Johnson live in the Accomac area. In Northampton, there is a hotly contested race for the District 4 seat on the board of supervisors. Supervisor H. Spencer Murray, of Franktown in that district, the longtime chairman, is not seeking re-election. L. Dixon Leatherbury, a Machipongo farmer who is chairman of the county planning commission and husband of Commonwealth’s Attorney Beverly P. Leatherbury, is seeking the post. David L. Kabler, a real estate broker, also of the Machipongo area, wants the job, too. An incumbent Accomack supervisor is being opposed in District 5. Supervisor Harrison W. “Harris” Phillips III is being challenged by James D. Rich. Both men live in the Bloxom area. Longtime District 7 Supervisor Laura Belle Gordy is not seeking re-election. Miriam E. Riggs and Howard “Jackie” Phillips, both of Cashville, are vying for the seat. For Accomack School Board, Jesse W. Speidel, of Chincoteague’s District 1; Edward F. Taylor, of Assawoman, in District 2; Camesha A. Handy, of the Parksley area in District 5; Paul C. Bull, of the Accomac area in District 6; and Ronnie E. Holden, of the Onancock area in District 8 were all appointed by the commission and are seeking election for the first time without opposition.

Vanessa K. Johnson, an Accomack County employee from New Church, is seeking the District 3 seat on the board of supervisors. Supervisor Grayson Chesser is not seeking re-election.

Capt. Todd Wessells, of the Accomack County Sheriff’s Office, lives in the Painter area, and is unopposed in his quest for sheriff. Sheriff Todd Godwin is retiring.

Commonwealth’s Attorney J. Spencer Morgan III, of Onancock, and Commissioner of the Revenue Deborah T. Midgett, of Parksley, are not opposed in seeking their first full four-year terms. Both were elected to fill the unexpired terms of previous constitutional officers.

In Northampton, District 5 Supervisor Robert Duer, Exmore’s town manager, is not seeking another term. Former Supervisor Betsy Mapp, of the Jamesville area, is running unopposed for the seat. The board of supervisors and the school board in Northampton are on staggered terms so not all the members’ terms will expire at the end of the year.

Beverly Leatherbury is seeking reelection as Northampton commonwealth’s attorney with no opponents. In addition to holding the top prosecutor’s job, she serves as the county’s attorney, which is not an elected position. Commissioner of Revenue Charlene P. Gray, of the Machipongo area, and Treasurer Cynthia S. Bradford, of Exmore, are also seeking four-year terms without opposition.

Charlena Jones, who ran an unsuccessful write-in campaign during a previous election, is officially running for the at-large Northampton school board seat held by Nancy Proto, who is not running. School board members Jo Ann P. Molera, of District 4, and William J. “Skip” Oakley, of District 5, are seeking reelection. Molera lives in Franktown and is the director of the county’s Victim/Witness Program. Oakley, the school board chairman, lives in Exmore.

S. Kyle Sturgis and Robin L. Rich-Coates are running for the two seats on the Eastern Shore Soil and Water District Board of Directors. Rich-Coates is an incumbent. Sturgis is a newcomer.

A special election will be held to fill the unexpired term of J. Wesley Travis, who resigned from the Cheriton Town Council. Jason P. VanMarter is unopposed in his bid for that job.