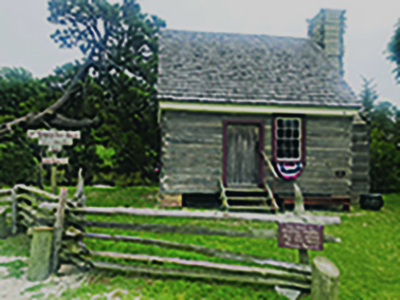 By Krystle Bono — The islands are marked with many notable pieces of history, from the famous ponies that graze the shores of Assateague to the towering red and white lighthouse that greets guests entering the National Wildlife refuge. Chincoteague also holds a historical treasure, a hidden gem that is nestled on Main Street and that marks the last reminder of Chincoteague’s original settlement. The treasure is known as Captain Timothy Hill House.

Built around the year 1800, it was erected on the island’s east side. The petite house, measuring 17 feet, 4 inches, by 16 feet, 4 inches, was one of 26 homes constructed after settlement began in the late 1700s. Hill House was fashioned in an architecture style that was very common for early colonists in the Mid-Atlantic and southern regions, consisting of a wooden chimney on the south wall, known as a “catted” chimney, two doors, a small window, and walls planked with logs. With access to trees, the early settlers constructed their houses with just an ax and saw by first cutting the logs, and then pit sawing them into planks that were three inches thick, with a height of 10 inches. The planks were then joined tightly at the corners with full dovetail notches. Today, Hill House’s wood-en chimney design is one of only two buildings in the state to have such a feature. Catted chimneys were prevalent at the time, built of wood and coated on the inside by a layer of clay protection.

In 1980, the land on which Hill House rested was sold, and with the sale came a new owner who wished to rid the property of the old, run-down stack of logs and rebuild. Richard Vesely, the builder hired to construct the new property, saw the diamond in the rough, as well as the historical value, and opted to move Hill House to a temporary location on the west side of the Island on North Main Street for safe keeping.

After sitting for 30 years on the new location, Hill House was purchased by new owners, Louisa Flaningam and Paul Brzozowski, in December 2009, and was set to be moved to its new home to be a storage shed. Upon inspection, a chunk of clapboard fell off, revealing wood and what looked like small carvings of ships on the exterior–vessels that would have sailed during Colonial times. After the discovery, Carl Lounsbury of the Colonial Williamsburg Foundation was called in, as well as Jeff Klee from the Virginia Department of Historic Resources. The two architectural historians gave the old building a once over and realized this was a historical artifact rather than storage shed material. They found the log walls to be intact, with just slight damage to the dovetail notches, and from there, more reinforcements were brought in to help, such as architect Mark Wenger, log smith Timothy Robinson, historical mason William Payne, carpenters Da-vid Bundick and Chris Klump, archaeologist Stephen Bilicki, historic paint conservator Susan Buck, and thus began Hill House’s return to glory. As restoration began, many other discoveries were made, including 21 generations of paint colors on the front door, which are still visible on the inside. An additional 38 carvings were found on the exterior logs, totaling 39 ships. As to whose hand forged the graffitied vessels remains a mystery to this day.

As for Hill House’s name, it originated from Timothy Hill, a Yankee sailor was shipwrecked off of Assateague, found his way to Chincoteague in 1822 and married Rebecca Russell, and the two had six children. There are tales of Hill’s 13-year-old granddaughter, Virginia “Jennie” Hill, haunting Hill House after her murder on June 18, 1885, by 20-year-old Tom Freeman at the 4463 Main Street location. Jennie was the daughter of Timothy Jr. and Zipporah Hill, and Freeman was a hand on the family’s farm. Freeman ambushed Jennie and her mother with a .32 caliber pistol after the young girl rejected his romantic proposals, with Jennie succumbing to her wounds later that night within the walls of the house. Freeman turned the gun on himself and took his own life after gunning down the Hills.

The home remained in the Hill family until 1954, with the last descendant who occupied the house recorded as Jack Hill. Chincoteague is still home to many Hill decedents.

Captain Timothy Hill House is registered as a Virginia Historic Landmark and was added to the The National Register of Historic Places in 2011, and can be toured on Fridays from 1 to 3 p.m. More information about special appointed visits, touring schedule, and photos can be found on the website www.captaintimothyhillhouse.com/Home or their Facebook page @CaptainTimothyHillHouse.